Upon arrival into Paris, make you own way to your chosen hotel for a 5-night stay on a bed & breakfast basis. Time for you to familiarise yourself with your local surroundings.

Check out of your hotel this morning and continue with your own arrangements.

15km from Le Golf National
Located in the Meudon Forest, just 10 km from the Porte de Versailles entrance into Paris, ibis Paris Meudon Velizy offers a 24-hour reception, bar and restaurant. The Château de Versailles is only a 15-minute drive away. All rooms are air-conditioned and feature a flat-screen TV with satellite channels, a wardrobe and a desk. The en suite bathroom includes a hairdryer and free toiletries. A buffet breakfast is available each morning at ibis Paris Meudon Velizy. Guests can also enjoy a drink in the bar or sample the international and traditional cuisine in the restaurant. Additional features include a terrace, free Wi-Fi access throughout, private parking on site and an elevator. Pont de Sèvres Metro Station is 5 km away and offers direct access to the centre of Paris, including Trocadèro and the Grands Magasins. 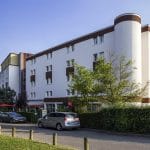 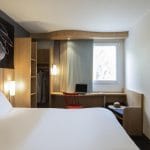 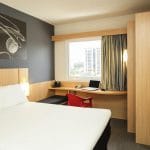 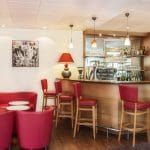 19km from Le Golf National
The Novotel Massy Palaiseau is well located, just 15 minutes from the centre of Paris by train and 19km from Le Golf National where the Ryder Cup is being held in 2018. Situated on the outskirts of Massy, the Novotel is 800m from Massy RER/HGV train station and with easy access to the A6 & A10. The hotel itself has an outdoor swimming pool, restaurant and bar (24 hr service) and ample parking for all guests. Hotel rooms are spacious and contemporary in design with access to free WiFi, a minibar, hairdryer, bathrobes, Satellite/Cable TV, Tea & coffee, Air conditioning and broadband line/computer network socket. The Novotel has 4 Accessible rooms, subject to availability. 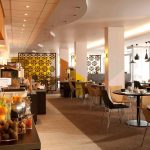 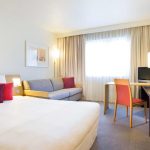 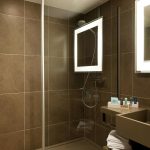 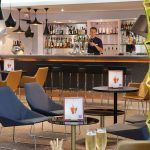 30km from Le Golf National
The Novotel Paris Centre Tour Eiffel is within walking distance of the Eiffel Tower in the heart of Paris and is a 10-minute drive to the Parc des Princes Stadium. The hotel features a fitness centre and 2 restaurants serving French and Japanese cuisine. The spacious rooms have en suite facilities and are contemporary in style. Free WiFi access is provided throughout. The Novotel Paris Centre Tour Eiffel has 2 restaurants, Novotel Café and the Benkay. Novotel Café serves traditional French cuisine and offers views over the Seine. The Benkay serves Japanese dishes. The Blue Fitness Eiffel centre has an indoor heated swimming pool and a fitness room. The Novotel Paris Centre Tour Eiffel offers easy access to the entire city via the nearby public transport network. 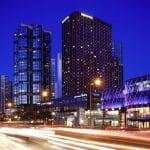 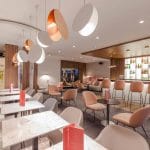 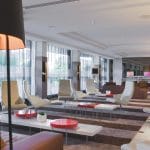 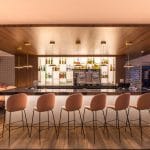 The Ryder Cup, played every two years between 12 players from the U.S. against 12 players from Europe, consists of five match-play sessions played over three days. In match play, the score of the match is determined based on the number of holes won by each side, as opposed to stroke play, where the number of strokes are added up at the end to determine a winner. Hypothetically, the player who takes more strokes in match play could conceivably still when his or her match.

Let’s break it down how the Ryder Cup works.
Points: The three days of the matches consist of a total of 28 matches, each with 1 point available. There are no extra holes in a Ryder Cup. Should the two sides be tied after 18 holes, each side earns a halve (1/2 point).
Winning point total: In order to achieve an outright win, a team must collect 14 1/2 points. In the case of a 14-14 tie, the winning team from the previous Ryder Cup retains the trophy.

How the matches work: The first two days of the Ryder Cup consists of two sessions — one session each of fourballs (or, “better ball”) and foursomes (or, “alternate shot”). There are four matches in each session the first two days. The final day of the matches is reserved for singles play.

What does “Fourballs” mean?: Fourballs is when two players from the U.S. tee off against two players from Europe in the same group. Each player plays his own ball for the entire hole. The lowest score — or better ball — from the two partners counts as the team score for the hole.

What does “Foursomes” mean?: In this format, two players from the U.S. tee off against two players from Europe in the same group, but play just one ball each, alternating shots. If player A tees off on the odd-numbered holes, player B tees off on the even-numbered holes. The team with the lower score takes the hole.
What does “Singles” mean?: In “singles” — the final session of the Ryder Cup — their are 12, separate, one-on-one matches contested with one player from the U.S. squaring off against one player from Europe. Singles is the only session in the Ryder Cup where every player from each side plays.

What does it mean to “concede?”: Unlike stroke play, players do not have to “putt-out” in match play. If a player “concedes” a putt to his opponent, the opponent is allowed to pick his ball up, taking the score he would have made on the next stroke, and move on to the next hole. A concession can be made on a hole, a putt, or a putt that closes out the match.

How is a line-up determined for each session?: The captain from the U.S. and the captain from Europe determine which of their players will play together in a particular session, as well as the order in which they will play. The captains submit an envelope with their respective line ups and do not know ahead of time who they’ll be up against.

Day 1. The second session line-up for Day 2 is revealed as the first session of Day 2 is winding down. And, finally, the line-up for the final day singles matches are revealed after play ends on Day 2.

Here are the tee times — with teams and format still to be determined — for the 2016 Ryder Cup, Sept. 20 to Oct. 2, at Hazeltine National in Chaska, Minn. U.S. Captain Davis Love III will be tasked with determining which order the matches will be played.

There were two unofficial matches between professionals from Great Britain and the United States before the birth of The Ryder Cup in 1927, both won by the British.

The first was played at Gleneagles in 1921 but the second of these, held at Wentworth in 1926, was undoubtedly the most significant for among those in the gallery was a man called Samuel Ryder.

Ryder was an English seed merchant and entrepreneur from St Albans in Hertfordshire who made his money selling penny seed packets. He had taken up golf relatively late in life to improve his health and employed Abe Mitchell, one of the golfing greats of his era, as his personal tutor.

Ryder was enthralled by the match at Wentworth, and particularly delighted to see Mitchell team up with George Duncan to defeat the defending Open Champion Jim Barnes and the great Walter Hagen. ‘We must do this again’, said Ryder in the bar afterwards and The Ryder Cup was born.

Ryder donated a small but striking gold cup that today epitomises all that is good in sporting competition. It cost £250 and the small golfing figure atop the cup, as requested by the donor, stands as a lasting memorial to Abe Mitchell.

The first 22 Ryder Cup matches pitched Great Britain and Ireland against the United States, with the US winning 18, GB and Ireland three and one match, the famous 1969 contest, tied.

In 1979, Europe entered the fray, with Seve Ballesteros and Antonio Garrido becoming the first continental golfers to play in The Ryder Cup. In the subsequent 16 matches, Europe have won eight, the United States seven, with one match tied.

The Ryder Cup has become one of the world’s greatest sporting contests as every two years 24 of the best players from Europe and the United States go head-to-head in match play competition. Drama, tension, incredible golf, camaraderie and sportsmanship are served in equal measure, captivating an audience of millions around the world. It’s an event that transcends sport, yet remains true to the spirit of its founder, Samuel Ryder.